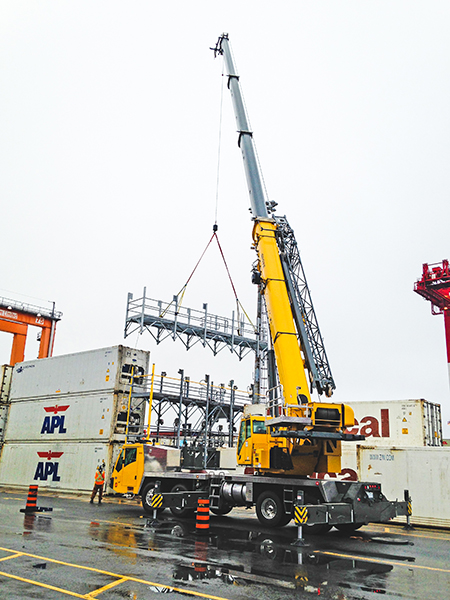 •    The Burnside, Nova Scotia-based company is the first in Canada to take delivery of the 115 USt Grove TMS9000-2 truck crane, which boasts industry-leading load charts on a carrier that’s lighter than competing truck crane models.
•    The Grove TMS9000-2’s impressive 169 ft main boom has helped R&D save hours on the job site by eliminating the need to install a swingaway jib.

When Manitowoc introduced the Grove TMS9000-2 in February of 2017, it also revealed the mantra behind the crane’s design: lighter, longer, stronger. It was these very same attributes that led R&D Crane Rental (R&D) to be the first company in Canada to take delivery of the new-model truck crane.

For the Burnside, Nova Scotia-based rental company, the TMS9000-2 represented an opportunity to grow its business and outperform the competition.

“We’re a relatively new company, and we wanted to add a crane to our fleet that would boost our reputation in Canada,” said Alex Jenkins, operations manager of R&D. “We feel that the TMS9000-2 has done that. The main selling point for us was the longer main boom. Other comparable cranes only have 142 ft of main boom, while the TMS9000-2 gives you 169 ft. That extra reach has saved us hours on the job since we don’t have to take a swingaway jib on and off the crane.”

The TMS9000-2’s added reach is already coming in handy on the job site. R&D is putting the crane to work to help build a new Marriott-branded hotel in Halifax, Nova Scotia, where the crane is hoisting formwork panels at radii ranging from 140 to 150 ft. The crane is expected to work on the project through January 2018.

Jenkins also credited the crane’s weight and 115 USt capacity with giving R&D an edge over its competition.

“The TMS9000-2 has a comparable gross weight to that of a lower-capacity crane, but you also get extra boom length. This makes it easier to get proper road permits in our region,” Jenkins explained. “The crane has worked almost every day since we acquired it. It gives us the reach we need to adapt to a wide range of job sites.”

R&D Crane is a division of the Cherubini Group of companies and provides crane services to numerous industries, including construction, commercial, marine, wind and residential. R&D’s team of certified operators, engineers and managers have used Manitowoc cranes on a number of projects, including the McDonald Bridge project near Halifax, where the company used a Manitowoc 16000.

Manitowoc Unveils New National NBT40-2 Series Boom Trucks
03/12/20
Manitowoc unveils the new National Crane NBT40-2 series boom trucks at CONEXPO 2020! The new NBT40-2 series is proudly American-made and manufactured at the company's factory in Shady Grove, Pennsylvania. The NBT40-2 142 ft five-section boom is the longest in its size range. The long boom allows the operator to perform more lifts without the use of a jib, reducing setup time and improving efficiency, making it ideal for work in residential or commercial construction industries!
Read more
Image

Introducing New Manitowoc MLC150-1: Increased Efficiency & Versatility
02/24/20
•    The MLC150-1 has new features that make it easier to transport to the job site and quicker to assemble than its crawler-crane predecessors. •    The new model features an upgraded cab for increased operator comfort.
Read more
View more