Grove Boosts Telecrawler Portfolio With The Launch Of Mid-Size GHC85 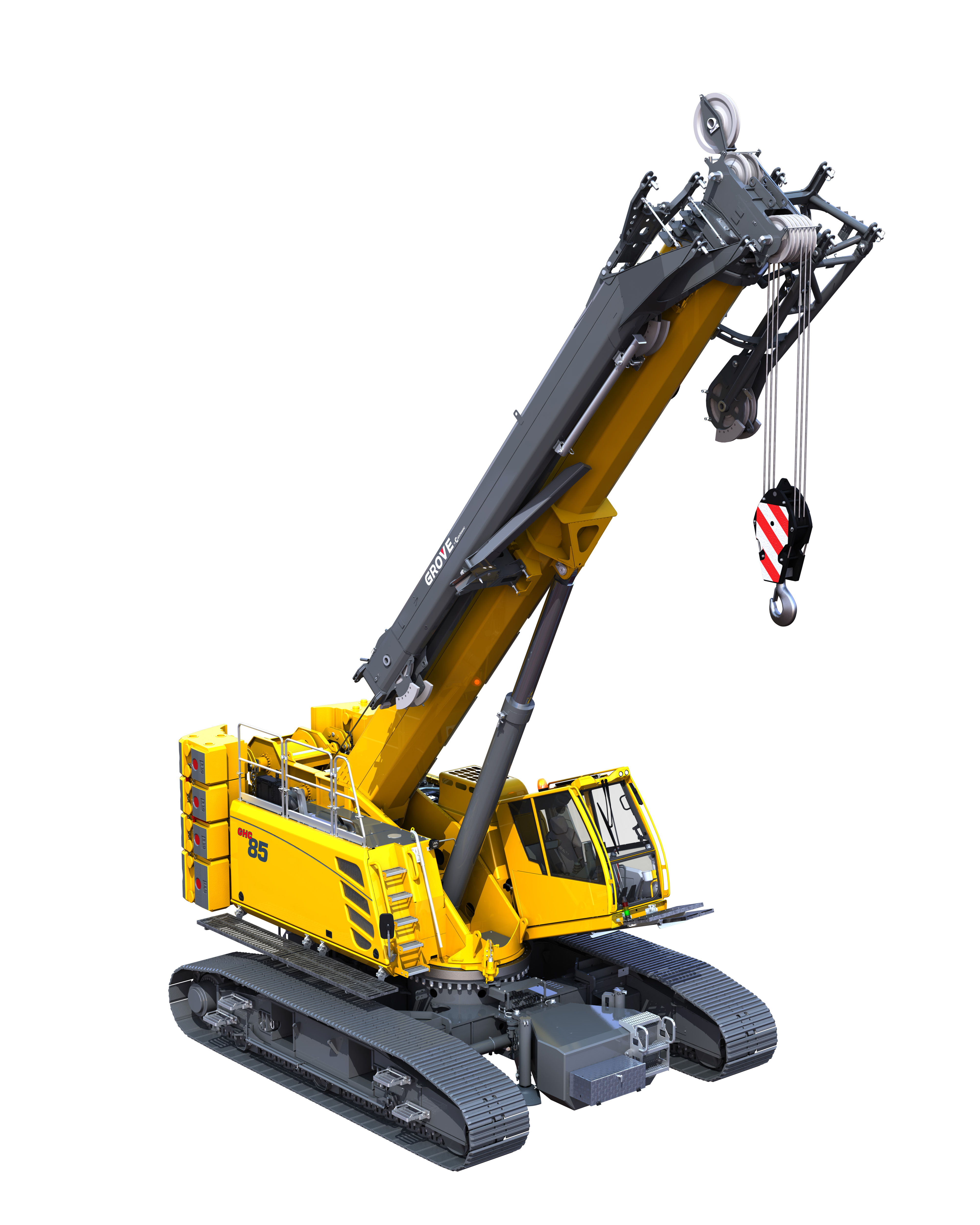 Manitowoc has added an eighth model to its telescoping crawler crane range in the Americas. Featuring a capacity of 85 USt and the longest boom of its class, the Grove GHC85 is positioned in the middle of Grove's range of telecrawlers.

The versatile crane is ideal for use in utility applications, general construction work, bridge work, pile driving, and as an assist crane for assembling other cranes. Frame-mounted jacks and counterweight lifting cylinders enable the crane to self-assemble, which can be controlled via a wireless remote. It can be transported to the jobsite in just three loads, or four loads when its crawlers are carried separately.

Without the need for outriggers, the GHC85 can quickly move from one static pick to the next. Its ability to maintain 100% pick-and-carry capabilities on inclines up to 4° makes it suitable for repetitive utility work, such as setting poles, moving solar panels, or setting up larger cranes.

“The biggest advantage of a telecrawler is that you can work efficiently on both even and uneven terrain with solid pick-and-carry charts,” said JJ Grace, product manager for GHC cranes.

The 36-inch triple-bar grouser shoes on the tracks offer a high level of stability, in addition to reducing soil compaction, by producing ground bearing pressures as low as 13.2 psi without load, and as high as 24.9 psi with load.

The crane’s several track span settings (covering both symmetrical and asymmetrical configurations) are made possible by the hydraulically extendable and retractable cross members that enhance stability even further.

“The maximum track span is 16.7 ft, but one track could be at 100% and the other at 50%, enabling an operator to maneuver and pick in confined spaces,” Grace explained.

Functions and options, such as working range limitation and a cold-weather package, will also appeal to those engaged in special civil and hydraulic engineering applications.

Offering elevations from -3° to +80.5°, the main boom length covers 36.1 ft to 137.7 ft. Its five sections are adjusted via a four-stage cylinder. A 49.3 ft bi-fold swingaway standard boom extension is offsettable at 0°, 20°, and 40°, providing a useful point for attachments that are ideal for the utility sector. A 10 ft heavy-duty jib with 10° offset is another option, and it’s stowable on the left-hand side of the boom.

Although the hoists are mounted over the rear counterweight, the in-cab monitor with a 7-inch screen provides an operator a way to closely monitor hoist operation. Standard rear and right-hand cameras improve awareness for the operator. Engine bay sound insulation enables quiet communication with riggers on the jobsite.

The operator’s ability to view distant loads are improved in several ways, most notably through the standard 20° cab tilt. Other options include a radio remote control for operation from outside the cab, as well as a third hoist that is perfectly suited for foundation applications.

Operators will also appreciate the many ergonomic benefits of the high-vis cab, such as the electric dual-axis controls, joystick control buttons for optional utility attachments, and the Graphical Rated Capacity Limiter. This system gives an audio-visual warning and control lever lockout whenever load limits are approached or exceeded, as well as providing data on boom angle, length, and radius, plus maximum permissible load, momentary load, and inclinometer readings.

R&D Cranes Performs Impressive Multi-Crane Lift
06/07/22
R&D Cranes recently completed their final lift for the Port Land’s Project, which consists of five new bridges that will soon connect downtown Toronto to the future Villiers Island. The new island will be created by extending the Don River through the Port Lands.
Read more
Image

Potain Self-Erecting Cranes: A Go-To Solution in an Evolving Marketplace
05/18/22
Potain self-erecting cranes are designed to offer maximum mobility, versatility, and capacity to get the job done. Let’s look at the range on offer.
Read more
Image