•    MK Builders has switched from mobile cranes to Potain self-erecting cranes and seen benefits in efficiency and capabilities, saving time and money in the process.
•    The contractor has benefited from improved access, visibility and productivity while building a multi-unit residential complex in Pennsylvania.

MK Builders, a framing contractor company based in Paradise, Pennsylvania, has seen great improvements in its residential homebuilding operations since making a switch to Potain self-erecting cranes. In the past, the company had used mobile cranes for these applications, but with a fleet of self-erecting cranes, it has increased efficiency on the jobsite, improved visibility, optimized its crew’s operations and yielded a higher return on investment.

MK Builders has four self-erecting cranes it its fleet, a Potain HDT 80, a Potain Igo T 85 A and two Potain Igo T130s. It is using them for tasks such as setting floor trusses, wood framing and paneling for residential builds, among several other tasks.

“The fact that you can use the remote control to operate this crane from anywhere on the job site — in the building or on the ground — is the best thing that could have happened for us,” said Jacob King, superintendent at MK Builders. “It’s all about speed and efficiency. We complete jobs quicker with the tower cranes and with less people.” 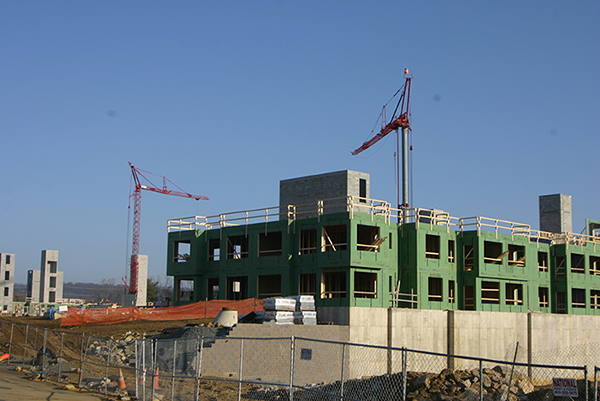 MK Builders said that self-erecting cranes have provided many improvements over its previous operations that relied on larger mobile cranes, including:

- Easier transport to and from the jobsite
- Better visibility with remote controlled operation
- Fewer crew required to operate the crane
- Easier access to sections of the job site, due to the cranes’ compact footprints
- Less physical labor required to move materials on the jobsite
- Improved reach and radius to have access to the entire jobsite

Currently MK Builders is constructing a multi-family housing complex in Malvern, Pennsylvania, that consists of two, four-story apartment buildings and a one-story clubhouse. The contractor knew that it wanted to use self-erecting cranes for this job to save both time and money. The company deployed its Potain HDT 80 and Potain Igo T 85 A cranes for the job site, which features many unique challenges.

In particular, a large retention pond situated on one side of the job site limits the space in which the company can erect a crane and perform lifts. Mobile cranes would not have fit on the job site, but MK Builder’s two self-erecting cranes were easily erected. And because the cranes both feature long radii and ample height under hook, the contractor has been able to complete its lifts without having to decommission and re-erect the cranes multiple times on the site. The HDT 80 features a 148 ft jib length and 176 ft maximum hook height while the Igo T 85 A has a 148 ft jib length and 167 ft maximum height.

“We chose the HDT 80 and the Igo T 85 A to help build both four-story buildings and the clubhouse because they could reach the height that we needed,” King said. “Also, with the retention pond being on site, these cranes enable us to reach the other side of the building without having to move the crane. We wouldn’t be able to complete the job as effectively with a mobile crane.”

MK Builders started the Malvern residential project in October 2018 and expects to complete it by March 2019.

Finding Room in a Tight Space with MAXbsae Technology
06/24/20
As job sites get increasingly compact, users want a solution that offers more flexibility in how they configure their Grove mobile crane. With Manitowoc’s MAXbase technology, that solution is here.
Read more
Image

R&D Crane Expands Fleet with New GMK5250L to Meet Increasing Demand
06/15/20
R&D Crane, a division of the Cherubini Group of Companies operating in Atlantic Canada, recently expanded their extensive fleet with the purchase of a new Grove GMK5250L. R&D Crane has been providing crane services to a broad range of industries, including construction, commercial, marine, wind and residential for over 30 years.
Read more
Image